Skip to content
The sight of a beautiful bride, with all her jewelries, heavy lehnga-choli, and breathtaking makeup is a pretty normal sight. However our  featured bride is far from being  a mainstream one. 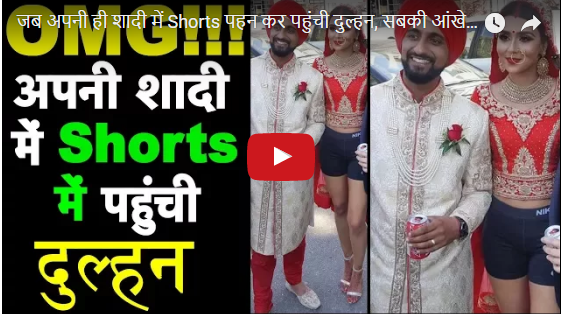 She is dazzling yes, she is beauteous and bewitching but she is bold as well. She wore a red choli with intricate gold work teamed with an embellished dupatta. Her bridal makeup and jewelry were on point. But what made her stand out from other brides was her a pair of black Nike shorts which switched roles with the traditional lehnga.

The social media went crazy over her dauntless act. The Twitter was flooded with responses pertaining to her bodacious move. The plight however were the sarcastic tweets with taunting reactions which tried to undermine this step. It is not a new facet of our debased mentality to slam such deeds. However, it is high time we began appreciating such bold steps to celebrate a liberal age than bringing down people for their courageous acts. Below are the some of the responses.

When you’ve planned to run away from your marriage… pic.twitter.com/2Mi9XD3aPG

When you’re raised in Canada but are Indian at heart. pic.twitter.com/WAHjh06EPB

When u invite Ranveer singh to ur Wedding. ??????#LahangaChor pic.twitter.com/3gcV3ssWVd

Watch The Video Below